Our top visitor locations in the French lake district 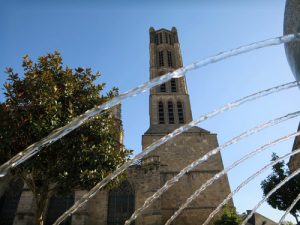 With a developing resort in the region, we’ve spent quite a bit of time exploring the Limousin in the heart of France – so here are our top recommendations – and these are personal recommendations, not taken from a guidebook!

The Limousin is known for being the rural heartland of France, but the stunning city of Limoges – which originates to Roman times – is one of its highlights in our opinion. It’s a designated  “Ville d’Art et d’Histoire” (“City of Art and History”) and as such it’s got a rich, historic culture.

The city’s centrepiece is the Cathédrale Saint-Etienne, which is the only example of Gothic architecture in the city. It also took a long time to build – from 1273 until the late 19th century!

Limoges ‘old town’ is lovely, with quaint shops and small, quiet streets. The city is also world famous for its porcelain (Renior for example began his career painting porcelain in Limoges) and although production has mostly stopped now, there are many artisan shops and museums to enjoy.

Now this one is a must, for sad reasons. It’s not a happy experience, but it’s an experience none-the-less. Without saying too much, the village was completely destroyed by the German SS on June 10th 1944. The village was left as it was after that day – cars and all. A guided tour of this historically significant village is recommended and the visitors centre features a fantastic library. You’ll remember visiting here for the rest of your life, although it could be quite upsetting for children.

The Limousin has many lovely villages and towns, each with unique characteristics. One of our favourites has to be Bellac, in the north west of the region. It has a more modern side on the top of the valley with all the local amenities you would expect, however if you explore a bit more and head down a beautiful treelined walk by descending manmade paths in the cliff face towards the river you are greeted with the 13th century bridge across the tranquil River Vincou that gives a lovely view across Bellac.

The town holds traditional markets a few times every week. It features ancient houses, the remains of the original town walls and the impressive 17th century town hall. Religious monuments here include the 13th century Church of Notre-Dame de Bellac and two smaller chapels. There is also an old leather factory here which has been turned into an interesting museum.

Situated in the Creuse department of the Limousin, the town is probably best known for its tapestries and carpets, for which it is world famous having manufactured these for around 600 years. It is also a very picturesque town with old narrow streets, beautiful architecture, unique shops and restaurants. The countryside surrounding the town is also worth a photo or two.

Up in the north of the region you can find the ruins of Château de Crozant, which rests on top of a rocky outcrop largely surrounded by a natural moat. It was one of the most powerful fortresses of France during the Middle Ages. Enjoy beautiful walks around Crozant Valley and take in the spectacular views across the gorge. The site gave its name to the school of impressionist painters ‘Crozant’ and inspired many nineteenth Century artists including Monet (who painted over 20 works here) and Guillaumin. Hundreds of painters flock here to follow in the footsteps, setting up their canvases along the Creuse river.

In for the long-haul – our top 5 accessories