Unearthing the past in our French resort 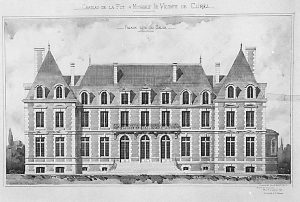 Old drawing of the main Chateau

Many of the resorts that are being constructed around the world are brand new – which is why we felt compelled to write a brief summary of the amazing history behind the Halcyon Developments Group’s development in France, the Wyndham Halcyon Retreat. Many of us who work here are fascinated by it!

The original history of Halcyon Retreat site goes back centuries. It lies on ‘The Way of St. James’ on the medieval pilgrimage route to the Cathedral of Santiago de Compostela in Galicia, north western Spain, where tradition has it that the remains of the apostle Saint James is buried.

In the 16th Century the Château de la Fot was built next to the route, which explains the presence of a collection of iron crosses built throughout the grounds and a three foot statue of Christ, within a hidden grove in the grounds. Château de la Fot is a small castle and is now the site of the Halcyon Retreat Spa. It has a rectangular main building flanked by two turreted towers which were built on the instructions of the Lestang family. Some of the Château de la Fot foundations date back to the 12th Century… so there is an awful lot of history here.

Just 250 metres away from Château de la Fot lies the larger Château de la Cazine, completed in 1898. It was erected in a 17th Century Louis XIV architectural style on behalf of the Viscount of Fôt, Paul du Curel, who had purchased the buildings and land the previous year. It is a replica of a Château that the Viscount stayed in further south and was built as a wedding present for his wife. This new Château had 54 rooms and gave some semblance to the resort we see now. A red brick façade and slate roof makes the Château looks stately without being pompous and it soon became ‘the principle Château’ where the Viscount lived with his wife and son, Charles.

On the death of his father, Charles de Curel moved back into the Château de la Fot with his wife because she didn’t like the larger one. Charles’ daughter Jeanne Marie got married in the chapel of the main Château de la Cazine (now the fine wine bar) to the Marquis Armand Vasselot of Reigne. They then lived in the Château de la Cazine with their eleven children. The ‘Silver’ pond close by was built to commemorate their silver anniversary. This is still there.

We know little about the chateau in the early 20th Century, but we do have a unique collection of original letters, business notes and diaries from the 1910-1944 era which offer a fascinating insight into life back then.

The site also had a role during the Second World War. Château de la Cazine became a perfect refuge for the French resistance. The movement had their main focus in the nearby city of Limoges. They would hide out at the Château with nearby villagers during Nazi attacks. This was possible because the locals fooled the Germans into believing that the natural springs on site were poisonous and they would be wise to stay away from the site. The Château was also converted into a temporary hospital for injured servicemen during this time.

After Viscount Charles’ death, the two Châteaux and surrounding grounds were left to his wife and daughter, with whom it all remained until being sold off in late 1980. Lucian Pfeiffer then bought into Château de la Cazine. The site remained a private dwelling until President Franςois Mitterrand visited – he loved it all so much he released government funds to turn the Château into a hotel, whilst the Château de la Fot became a restaurant and the outbuildings were turned into a summer education camp.

The Directors of the Halcyon Developments Group bought the Château and grounds in December 2010. With Chateau de la Cazine fully restored and refurbished into the hotel you see now, the resort’s development is ongoing with a focus on the new facilities and a structured build programme for the accommodation areas.

Chill out in Dubai airport – in an igloo